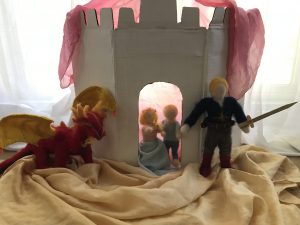 The dragon who in summer sleeps
In autumn dark now out does creep;
Though darkness comes, we will not fear,
For courage and strength are with us here.

September has begun, and a new group of children has come together at Bower Tree for a year of learning and growing. This is a time of uncertainty and excitement; we’re beginning something together, but no one knows quite what it is yet. As I watch our youngest new friends bravely step into the world of school for the very first time, as a gentle chill begins to enter the air, and as the very first yellow leaves fall from the maple trees, I am thinking about Michaelmas: the festival of courage.

Michaelmas is a festival traditionally celebrated in Waldorf schools in late September. Though in its historical Christian context it was the feast day of St. Michael the archangel, who is associated with dragon-slaying, this festival has evolved into a universal celebration of courage and strength as we collectively head toward the colder weather and inner challenges of winter. Various versions of the knight and the dragon story are often told at Waldorf schools this time of year. Michaelmas falls very near to the autumnal equinox, so this is also a celebration of the midpoint between the summer solstice and the winter solstice, when the days and nights are of equal length.

This is the time when we feel summer turning into autumn: another journey is beginning, both in the classroom and within our own hearts, as we descend  into the deep work of knowing each other and ourselves. Michaelmas marks the beginning of that quest, the movement into the demanding inwardness of winter and then back out again, stronger and wiser. Other autumn festivals celebrate related themes: the September holidays of Navaratri and Durga Puja in India celebrate the glorious victory of the forces of good, while in the Jewish tradition Rosh Hashanah celebrates the beginning of a new year as well as the re-creation of the self and the world: the pages flip back and the book begins anew.

In the classroom, we are learning our September songs and poems with their accompanying movements, which celebrate feelings of power and strength as well as the autumn harvest of root vegetables and the tail end of the Perseid meteor shower, which just ended a couple of weeks ago. The falling star is the symbol of summer departing, and the young knight rising up with their sword and golden cloak, mounted upon their flying horse, is the symbol of autumn. The children at Bower Tree are being invited to live within these symbols for the next few weeks, trying on the powerful poses of the knight as well as the rhythmic hammers of the blacksmith who forges the sword of courage. Horseback riding is a recurrent theme, linking multiple songs and poems to this month’s story, The Castle of Rosy Clouds, which is an adaptation of a Swedish fairy tale mixed with elements of the knight and the dragon story. September calls to the children to mount their horses, own their power, and believe that they are capable of taking on a great adventure. Like the hero of our story, they too can perform acts of courage in order to acquire the three keys to the castle: the sword of courage, the cloak of protection, and the flying horse. 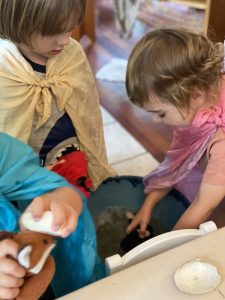 Leading up to our Michaelmas festival, in addition to baking and decorating a dragon-shaped loaf of bread, the children will be invited to help dye silks using yellow onion skins to create beautiful golden cloaks of protection that they can take home with them and keep in preparation for the wholesome challenges of winter and life in general. At this moment in Earth’s story, as the pandemic still grinds on and we find ourselves faced with ever-mounting environmental anxieties, Michaelmas has never been more relevant. We are all called to go within ourselves to that wellspring of strength and resilience: the sanctuary, the golden place, the Castle of Rosy Clouds. We are all called to find hope and courage in the face of hardship and melancholy. 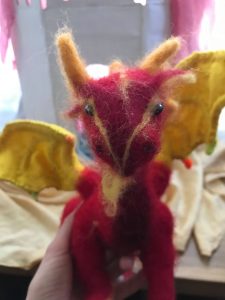 It is never too early or too late to introduce these important themes to our children. They are looking to us for stories and symbols that will give them the tools to navigate this rapidly changing world with courage and grace. Provided that we take care to portray the knight as a universal archetype rather than a gender-specific role, the old stories of confronting the dragon are just as relevant today as they ever were. We all have dragons to tame, after all; some of them we must take on alone, and some of them we can confront together. As parents, caregivers, and educators, my hope is that we tame our own dragons well enough to guide our children in taming theirs. The more we are all able to face difficulty head-on, with courage and hope, the closer we will be to creating a  society that can deal with our collective challenges. So, let us begin together. In the midst of darkness, may we sow light.

One Reply to “beginning the quest”